What Steak Should You Use For Fajitas?

Fajita comes from the Spanish word for little belt or band and is a fairly new phenomenon in Tex-Mex cuisine that did not show up on menus until the 1970s. The name comes from how … 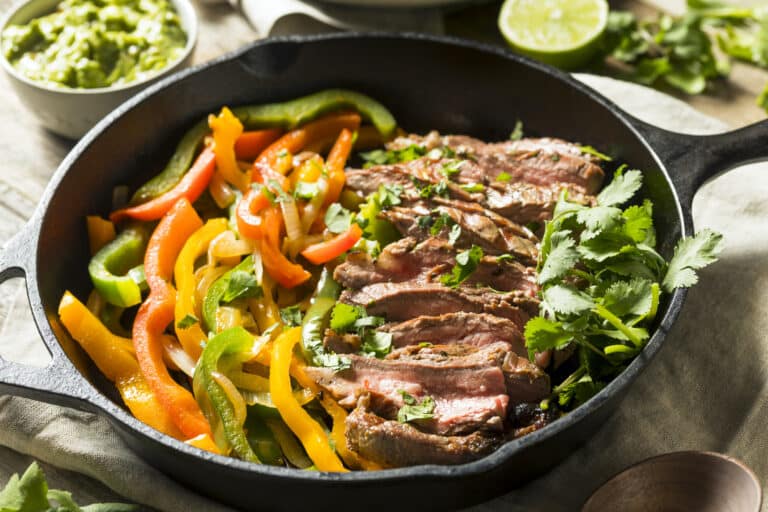 You are here: Home » Cooking Tips » What Steak Should You Use For Fajitas?

Fajita comes from the Spanish word for little belt or band and is a fairly new phenomenon in Tex-Mex cuisine that did not show up on menus until the 1970s. The name comes from how the cut of meat looks. The fajita dish is usually made with a narrow strip of meat about an inch thick, resembling a belt. The meat is grilled, sliced, and served on a tortilla. Fajitas are traditionally made from some of the least valuable parts of the cow that were once provided to vaqueros as a part of their pay. Several different cuts are commonly used to make fajitas but skirt steaks are the most popular.

Why skirt steaks are the best steak for fajitas

Skirt steaks are by far the most popular type of steak for fajitas because of texture. The meat is coarse with loose muscle fibers, which is you need for the dish. Skirt steaks come from the cow’s diaphragm muscles beneath the heart and lungs. It’s lean and tough cut but it will give you more beefy flavor than many other cuts that might offer superior tenderness.

Because of how tough and fibrous they can be, it is best to marinate skirt steaks in something acidic to help tenderize the meat. The fibrous nature of skirt steaks allows them to soak up marinades well. You will need to cook them somewhere between rare and medium-rare to ensure a tender texture but not too rare since they can be unpleasantly chewy when undercooked. It is also important to cut a skirt steak into thin slices across the grain, which means to cut across the muscle fibers.

Skirt steaks are the best for fajitas but you can use a variety of other beef cuts and get a similar result. Here are some skirt steak alternatives for your fajitas:

Flank steaks have the same long, narrow belt shape as skirt steaks. You will sometimes see them sold as London Broil. Flank steaks come from the bottom of the cow’s abdomen and have a similar appearance and texture to skirt steaks.

Hanger steak consists of what is called the hanging tender. This is a section of the diaphragm muscle connected to the rearmost rib. It hangs from the diaphragm muscle, hence the name. Hanger steak is comprised of muscle that does not do a lot of work, which is why it is more tender than both skirt and flank steak; however, it should still be cooked quickly at a high temperature to keep it from becoming tough and dry.

What Are USDA Beef Grades?

Is Your Barbecue Sauce Too Spicy? Try These Fixes