What Makes Peppers Hot? Capsaicin And Beyond

Chili peppers are some of the fieriest flavors on the planet, but what gives them their heat? What makes peppers hot (or hotter) when compared to another pepper? Like the complexity of grapes for wines, … 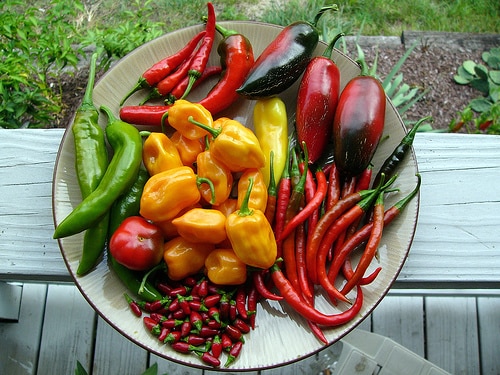 Chili peppers are some of the fieriest flavors on the planet, but what gives them their heat?

What makes peppers hot (or hotter) when compared to another pepper?

Like the complexity of grapes for wines, there are a lot of nuances in the world of chilies that help create these extreme heats. In fact two peppers of the same type (even from the same plant) can have big differences in spiciness. We’ll touch on many, but let’s start with the one spicy compound that binds them all: capsaicin.

The capsaicin in hot peppers defines spiciness in each variety.

Like mustard, wasabi and horseradish gain their heat from the compound allyl isothiocyanate, hot peppers have the famous capsaicin. Why famous? There’s an entire hot pepper scale, called the Scoville scale, that’s been designed to measure the overall heat of hot peppers through the amount of capsaicin in the chili. The more capsaicin in a chili, the greater the spicy effect.

Unlike allyl isothiocyanate and its vaporous spice that affects the nostrils, capsaicin heat hits the mouth, esophagus, and stomach with a fiery sensation. The heat can get very extreme. Some hot peppers have now reached heat levels hundreds of times greater than an average jalapeño. That’s insane spice.

The soil in which a chili is grown affects the spiciness.

Now here is where the nuances kick in. The same type of pepper grown in two different locations can take on very different flavors and heat levels. The chili takes on flavors from the earth itself. This is one of the reasons why the Scoville scale deals in ranges and not in exact figures. A specific hot pepper can fall anywhere within its range based on this and most of the other factors listed below.

The ripeness of the chili is a factor in how hot a chili becomes.

Chilies change colors as they age. Nearly all start as green and turn red or reddish-brown, but you’ll find other color variations too. No matter what the color it ripens into, that older chili is going to be spicier than its younger self. That’s simply because the capsaicin in the chili increases as it ages. Again, the more capsaicin, the hotter the pepper.

It’s often the case that two chilies from the same plant have different levels of spiciness. This can be due to how quickly each pepper has ripened, how much sunlight one one chili has had compared to another, or even the amount of seeds (see below) one chili has compared to the other peppers on the plant. There are a ton of factors that can affect heat even at the plant level, so don’t expect chilies from your garden to all pack the same punch.

The seeds and membrane in the chili affects heat.

This again ties into capsaicin. A lot of the capsaicin in a hot pepper is carried in the pepper seeds and the membrane, so you can lessen the heat of a chili simply by scraping both out of it before eating or cooking with it. To spice up a dish, you can cut up a chili with the seeds and membrane intact.

Variances in taste affect a person’s sense of pepper heat.

That’s right – we save the most complex nuance for last. Two people eating the same exact chili – from the same soil, plant, and with the same amount of membrane and seeds – can have very different takes on the pepper’s overall spiciness. Each person’s taste buds are different, and their bodies may react differently in terms of capsaicin side effects. Some people can handle extreme heat better than others.

Now your taste buds and your body as a whole can be trained to take on greater levels of heat. It’s done by slowly working your way up the Scoville scale, tackling mild hot peppers, then moving to the mediums and hots. If you want the challenge, check out our partner site PepperScale which talks all things hot pepper, including a ton of information on individual chilies and the Scoville scale. The peppers at the upper end carry severe spice, so be sure to proceed with caution!

What Is Barbecue? A Quick Review Of BBQ In America