When you hear the word “wasabi”, you likely first think of sushi or wasabi peas. It’s that spicy green paste that comes next to the ginger or the powder that coats that crunchy snack. But … 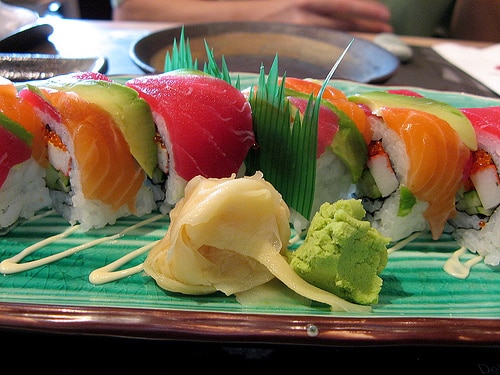 When you hear the word “wasabi”, you likely first think of sushi or wasabi peas.

It’s that spicy green paste that comes next to the ginger or the powder that coats that crunchy snack. But what is wasabi really? How hot is it? And can you find it easily in stores?

The answers will surprise you. In fact, unless you’re in Japan, a gourmet store, or a high-end restaurant, what you often get as wasabi is actually something else entirely.

Here’s the simple science answer: Wasabi comes from the Brassicaceae family of flowering plants, and there’s a whole heck of a lot of plants that you know that are part of that family: cabbage, horseradish, and mustards just to name a few. Wasabi is often called Japanese horseradish due to its similarities to that vegetable.

The root plant Wasabia Japonica is found natively in Japan around stream beds, and its stems  (called rhizomes) are popular to use in all sorts of foods because of its natural spiciness. When raw wasabi is sold, it’s those stems that you usually get (which you then grate), or you can purchase it as a paste or in powder form. Though this powder is likely not real wasabi, which we’ll get to shortly,but you likely already have a guess.

How hot is wasabi?

It’s hot, but not is the same way that hot peppers are hot. Hot peppers get their spiciness from the chemical capsaicin, whereas wasabi gains its spiciness from isothiocyanates which create a vapor. It’s the kind of heat – like horseradish – that hits the nose, not really the mouth. In fact, it has sort of a smelling salts effect, where your nostrils sting a bit (sometimes more than a bit) when you get a good bite of wasabi.

So how hot is hot? In terms of the short-term, a decent serving of wasabi can pack a wallop – the same type of intensity (but not spice) as a habanero pepper. But unlike chili pepper heat, wasabi spiciness is short-lived and easy to remedy. It’ll calm down in less than a minute and a glass of water will pretty much kick wasabi burn. It’s like the exact opposite of hot peppers with their lingering heat, where water can actually worsen the burn.

Here’s the thing – it tastes different than you likely think. Why? Because typically what you think is wasabi isn’t really wasabi. Due to local Japanese demand, the “wasabi” most often served outside of Japan is not real wasabi. It’s actually horseradish mixed with dry mustard and a touch of food coloring to give it that green hue. Yes, it’s very unlikely your local sushi restaurant is serving you up the real thing.

The differences: Wasabi has an earthy, more organic taste, compared to horseradish and while both have that intense mustard-like tang, wasabi doesn’t have the lasting sting that horseradish does. It’s just a lot more subtle of a plant in terms of taste.

How can I use wasabi? What’s out there to buy?

Well, again, a lot of foods claim wasabi when it’s really more likely horseradish, but let’s just go by the label. Wasabi is obviously popular with sushi; it’s a great Bloody Mary mixer, and in powdered form (this is most likely horseradish or a wasabi/horseradish blend) it’s used on lots of snacks from wasabi peas to wasabi potato chips and even wasabi candy canes. In paste form, it’s used often in Japanese cooking, and it’s terrific as a sauce or marinade with roast beef, steak, burgers, and salmon, just to name a few.

Wasabi leaves are tasty too. They have a mildly spicy flavor that makes for a unique salad option.

When cooking with wasabi, you want to use it fresh. Real wasabi loses its flavor and pungency very quickly – 15 to 20 minutes can make or break the flavor experience. So prepare accordingly.

Is wasabi good for you?

A definite yes here. Wasabi, like other fiery foods, is healthy eating. Chemicals in the plant have been shown to have antibacterial, antifungal, and anti-inflammatory properties. It has been linked to cancer prevention, allergy reduction, and pain relief. One thing that’s a definite – it’ll clear up those sinuses when you’re battling a bad cold.

So now you know: Wasabi is one of those fiery flavors that’s well known, but in reality hard to find. The next time you go reaching for wasabi paste or powder , unless you are in Japan, read the label carefully. And, unless it’s stated no doubt that it’s the real deal, know that it’s likely horseradish that you’re getting. If you do come across the real deal, enjoy it. It’s one of those fiery flavors that’s unique beyond compare.