You likely know it as the spicy white condiment that you slather on a sandwich, roast beef or prime rib for a real kick. But how much more do you know? Horseradish has quite a following, and … 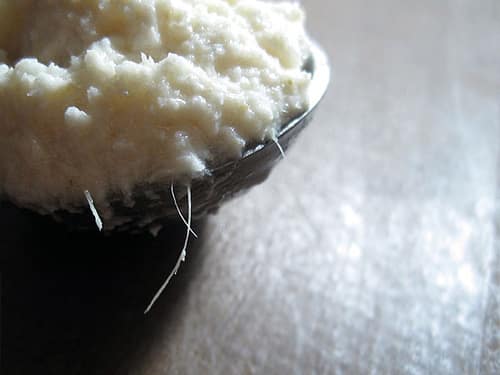 You are here: Home » Cooking Tips » What Is Horseradish?

You likely know it as the spicy white condiment that you slather on a sandwich, roast beef or prime rib for a real kick. But how much more do you know? Horseradish has quite a following, and yet if you ask many people what it is, they’ll likely have no real idea.

This is one fiery food that shows up in more places than you likely realize, and in spite of its name, it has little to do with horses or radishes, at least in the way that we think of them. We’ll help make sense of that too. Let’s explore horseradish.

Simply, horseradish is a root vegetable from the same family of plants (Brassicaceae)  as cabbage, mustard, and wasabi. It’s been used for eons in both cooking and medicine. Seriously eons. It’s mentioned in ancient Greek mythology by the Delphic Oracle. That’s old.

Horseradish is a native plant to both Europe, Russia, and western Asia, but these days it’s grown in many regions across the world.

How hot is horseradish?

The plant produces the same oil as spicy mustard and wasabi – allyl isothiocyanate. This compound, when released through scraping, shaving, or chewing, causes a burning sensation primarily in your nose. It’s a totally different fiery heat experience than chili peppers. You don’t even need to be eating horseradish to experience it. Just cutting into a root a tiny bit can release enough of these oils to drive your nostrils crazy.

Surprisingly, if you have a horseradish root in front of you, it likely won’t smell like anything at all. Think of the isothiocyanates as the plants defensive measure to keep predatory animals at bay. One whiff of the horseradish after a good bite will definitely ward off many wild animals, and a lot of humans too!

How hot horseradish is really depends on your taste buds and the reaction you have to isothiocyanates. You can’t really compare it to a hot pepper on the Scoville scale as that’s based off of the chemical capsaicin. Though, some have compared the heat (and the heat of wasabi) to close to habanero heat. That is, at least, when the horseradish is fresh.

In terms of fresh horseradish, there’s a sweet tartness behind the heat. The spiciness comes on fast, and it can hit your nostrils hard if you take a big bite. Things change, though, if you’ve left fresh shaved horseradish sitting out. It loses its pungency quickly once it’s scraped, shaved, or cut up. If not covered in an air-tight container, the exposed horseradish won’t have that much kick to it at all within 15 or 20 minutes. It’ll still have a strong taste, just not as fiery.[easyazon_block add_to_cart=”default” align=”left” asin=”B00BD2CIX6″ cloaking=”default” layout=”top” localization=”default” locale=”US” nofollow=”default” new_window=”default” tag=”fieryflavors-20″]

Are horseradish and wasabi related?

They are from the same family of vegetables, and in terms of taste, they are similar to a degree. Horseradish heat is a little more intense; wasabi has a more subtle earthy flavor. And horseradish is a lot more common than high-demand wasabi. In fact, real wasabi outside of Japan is a luxury. What you typically get in the rest of the world as wasabi (for instance, with sushi) is really horseradish dressed up to look the part. Food coloring and dried mustard are added to get the appearance and tastes closer. It’s one of the great food masquerades of all time.

What does horseradish have to do with horses? Or radishes?

Seriously nothing. Not in the way you are thinking of things at least. Horseradish is not related to a radish at all – the only thing that they have in common really is that they’re both root vegetables.

And horses? Well, horseradish is actually a poison to horses, so don’t go assuming that the name means it’s something horses should be eating.  The word horse in this instance has an old world meaning – “large or coarse”. So when you put things together you get a large or coarse radish, which makes more sense. It’s something big found underground similar to a radish.

Is horseradish good for you?

Again like wasabi, horseradish has a ton of health benefits. There’s a lot of fiber, antioxidants and vitamin C in this root vegetable. It’s a well-known stimulant for digestion and it’s often used as a diuretic.  It has anti-inflammatory properties, making it great for relieving arthritis and other aches and pains. It even has anti-viral properties which helps the body fight infections. Like wasabi, too, it’s been linked to cancer prevention. This is a whole-body health food.

What types of foods taste good with horseradish?

Here’s just a sampling. Horseradish is loved on meats of all kinds – from horseradish marinades and rubs on steaks and prime rib to horseradish sauces on salmon and tuna. Shaving fresh horseradish on top of dishes and into salads can add a fiery flavory explosion to a meal. Then you have the spicy drinks horseradish can fuel, most notably the infamous spicy Bloody Mary. Now that’s a kick that’ll wake you up.

Where can you buy horseradish?

You can find horseradish sauces, dips, and dressings in most any local supermarket. You may even find horseradish root in the more high-end grocery stores. There are also jars of shaved horseradish available which is great as a topping or for creating your own sauces. But know going in that pre-jarred horseradish -while spicy – won’t have the same intense flavor as horseradish that’s been freshly shaved.

This is one fiery flavor that you can find – at least in some form – nearly everywhere, that’s for sure. If you’ve never tried horseradish, get a little creative in the kitchen the next time you’re looking for a dip or marinade. At lease spice up that next Bloody Mary the way it should be! That’s the way, or course, we like it.