What Is Filet Mignon? A Comprehensive Guide

Filet mignon is one of the most popular types of beef steak. It is known for its tenderness and delicate flavor. But what is filet mignon? Where does it come from on a cow? How … 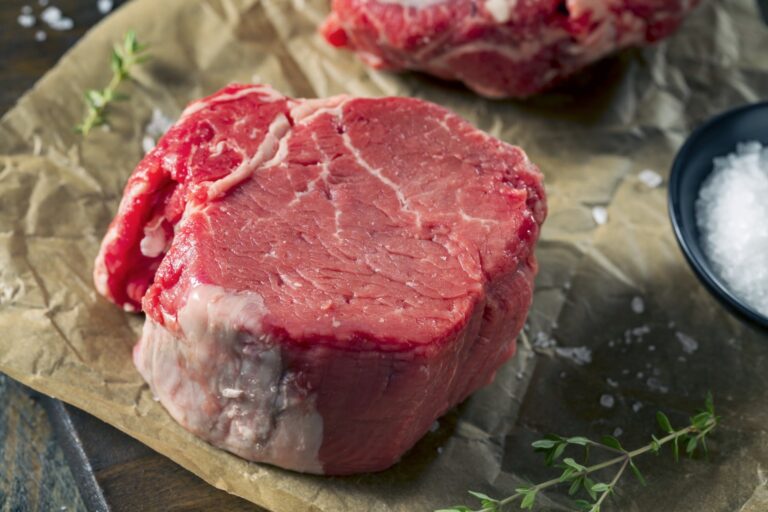 Filet mignon is one of the most popular types of beef steak. It is known for its tenderness and delicate flavor. But what is filet mignon? Where does it come from on a cow? How should you cook it to ensure that it comes out perfectly? Let’s cover all that and more so that you know the ins and outs of this steak cut.

What is filet mignon?

Filet mignon is a cut of steak that comes from the smaller end of the cow’s tenderloin. The filet mignon is one of the most tender cuts of beef because it comes from a muscle that doesn’t do much work. It’s a small, thick steak that is usually cut into individual servings.

How do filet mignon steaks compare to other steak cuts?

Take a look at our some of our comparison posts to see how filet mignon and other steaks are similar and different:

What does filet mignon mean? Are there other names for it?

The name filet mignon is French for “dainty fillet” or “cute fillet”. The name is thought to have originated in the 19th century. “Dainty fillet” is not a very appetizing translation, so the French name stuck in America among butchers and meat sellers.

The filet mignon is sometimes referred to as the “king of steaks.” It’s a premium cut of beef that is known for its tenderness and flavor. When cooked properly, filet mignon should be melt-in-your-mouth delicious.

Bring Heat To Your Steaks Up the Scale Set I: Ancho, Chipotle, and Habanero Powders
PepperScale's Up The Scale set features a trio of chilies that run you right up the Scoville Scale. Earthy ancho, smoky chipotle, and citrusy habanero. These powders are excellent as dry rubs or as a finishing spice. 100% chilies, no additives.
Buy Now
PepperScale and Fiery Flavors are both part of the CIndermint family of sites. Subscribers to PepperScale receive 15% off its fiery spices!

Where does filet mignon come from on a cow?

The filet mignon is cut from the tenderloin of a cow. The tenderloin runs down the center of the animal’s back, between the ribs and the rump. It is a long, cylindrical muscle that runs along the length of the spine.

How thick is filet mignon?

The filet mignon is usually cut into medallions or small steaks, about two to three inches thick.

The flavor of filet mignon is generally milder than other steak cuts, which some people prefer. The taste of filet mignon can best be described as beefy with a hint of sweetness.

Is filet mignon lean? Is it healthy?

This cut of meat is relatively lean, which means that it doesn’t have a lot of fat marbling throughout. That also means that it can dry out quickly if it’s not cooked properly.

When it comes to nutrition, filet mignon is a good source of protein and iron. It’s also slightly lower in calories (with lower levels of fat content) than many other steak cut choices, making it a good choice (among steaks) for those watching their weight.

The quick answer is yes, filet mignon is expensive. It’s among the most expensive steaks. But there are a few reasons why this beef is so costly.

First, filet mignon steaks comes from the most tender part of the cow, the loin. This area doesn’t get much exercise, so the muscle is very soft. That means filet mignon is also very lean, with very little fat marbling.

–> Learn More: All About Marbling In Meat

Second, because it’s so lean, filet mignon needs to be cooked carefully so it doesn’t dry out. That means it’s often served wrapped in bacon or with a sauce, adding to the overall cost.

All of these factors add up to make filet mignon one of the most prized cuts of meat you can buy.

What temperature is best for filet mignon?

A good rule of thumb for a perfectly cooked filet mignon is to cook it to no more than medium-rare, or about 130 to 135 degrees Fahrenheit. Medium-rare steaks are still lightly red in the interior and still juicy. Remember, filet mignon is relatively lean, so it tends to dry out at higher cooking temperatures.

Why does the filet mignon cut often have string around it when sold?

The string is there to keep the filet mignon from losing its shape while cooking. Yes, you cook the beef with the string still on. Take the string off after the steak has cooked and the meat has rested.

How to cook filet mignon for the best flavor

When shopping for filet mignon, look for cuts that are a uniform pink color with little to no fat on the outside.

When it comes to cooking filet mignon, less is more. This cut of meat is best cooked using simple methods like grilling or pan-searing. Season the steak with salt and pepper, then cook it over high heat until it reaches the desired internal temperature.

Remember, filet mignon is a lean cut of meat, so it’s important not to overcook it. Doing so will result in a dry, tough steak.

With this method, you sear your filet mignon in a hot pan, then finish it in a preheated oven. This method will give you a perfectly cooked steak that is evenly browned on the outside and juicy on the inside.

To sear filet mignon, heat a tablespoon of oil in a large skillet over high heat. Season the steak with salt and pepper, then place it in the hot skillet. Cook the filet mignon for two to three minutes per side, or until it is evenly browned.

Once the steak has been seared, transfer it to a preheated oven and cook it until it reaches the desired internal temperature.

How To Defrost Steak Without Ruining It