What Is Corned Beef? The Story Behind The Meat

What is corned beef? That question has an easy answer: it’s beef cured with salt. The beef used to make corned beef usually comes from the brisket, which is a cut from the front half … 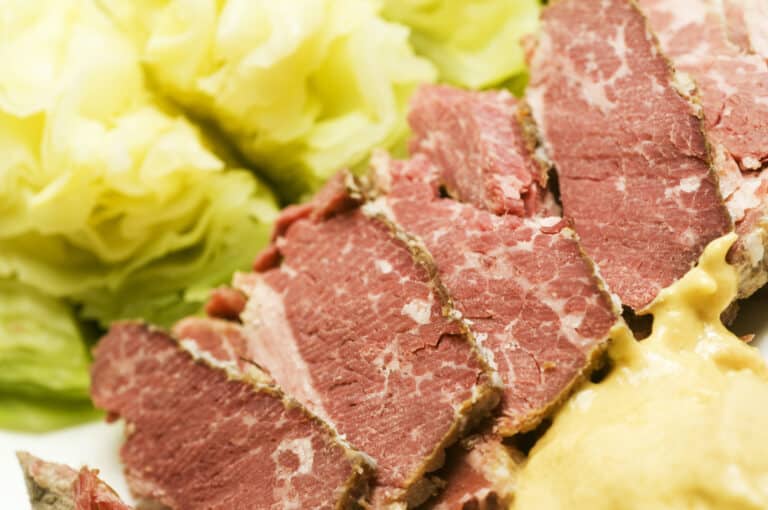 What is corned beef? That question has an easy answer: it’s beef cured with salt. The beef used to make corned beef usually comes from the brisket, which is a cut from the front half of the cow’s body. The corn part of the name doesn’t have anything to do with the grain corn; instead, it has to do with the type of salt originally used to cure corned beef. Grains of salt were called corns of salt so corning was a verb that meant salting.

Salt as a tool for preserving meat has been around for thousands of years, but the use of it to preserve beef that was then cooked and served with cabbage is largely an Irish American creation. It began with the mass immigration of Irish people to the US in the 19th century.

How is corned beef made?

Corned beef is made from the brisket of the cow that is soaked in a flavored brine for a week or so. The plate primal cut (sometimes called the navel cut) is sometimes used to make corned beef but usually, the brisket is preferred. The brine typically contains pink curing salt combined with regular table salt. Optional ingredients including pickling spices and garlic. In most cases, you will cook the corned beef by boiling it once the curing period is complete.

The flavor of corned beef

Corned beef does not taste like smoked brisket but you can taste some aspects of it in an expertly smoked brisket. The balance of meat and fat combined with the tender, rich character of the meat. Corned beef is salty as you might expect since it has been soaking for a week in sodium nitrite and concentrated table salt.

Above all, corned beef is intensely savory and meaty. The curing process enhances the umami properties of the meat and results in something along the lines of ham. Depending on the spices used in the curing process, you may also get notes of garlic and coriander seed.

How does corned beef compare to other types of beef?

Corned beef and pastrami are both brined in the same way; however, the pastrami is given a spice rub and then smoked after being removed from the brine. Pastrami has a smokier and spicier flavor profile than traditional corned beef.

Roast beef differs from both corned beef and pastrami because it has not been cured or smoked. While corned beef tends to be made from the brisket, roast beef can come from several cuts including fatty ones like rib roasts and lean ones like rump roasts.

What are the best ways to use corned beef?

The Reuben sandwich is one of the better-known applications for corned beef. It is made by pairing the beef with sauerkraut, Swiss cheese and Thousand Island dressing all of which are served on rye bread.

Corned beef hash is the traditional way to use leftover corned beef. It’s a combination of corned beef, finely diced potatoes, and onions. You cook the ingredients on the stove and serve it with a fried egg on top.

Which Steaks Have The Most Fat?

Five Types Of Smokers You Should Know