Steak Temps 101: What You Need To Know

A quality steak that is cooked correctly is widely considered to be the best type of meat. One of the biggest hurdles that most amateur steak cooks have to overcome is cooking it correctly which … 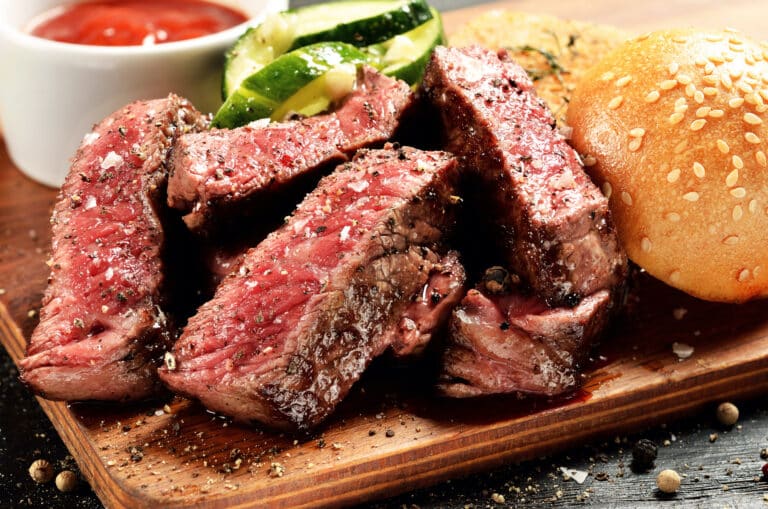 A quality steak that is cooked correctly is widely considered to be the best type of meat. One of the biggest hurdles that most amateur steak cooks have to overcome is cooking it correctly which requires them to judge doneness. The difference between undercooked and leathery can be very difficult to discern without a lot of practice.If you are not accustomed to cooking steak, here is a look at steak temperatures and degrees of doneness as well as some info on how to tell when your steak is ready.

Blue steak is sometimes called blue rare. Blue steaks have a light-to-moderate exterior sear. The idea is to brown the outside with minimal cooking on the inside; the meat on the inside will remain red and will not release much of its liquid. Unless you are cooking very high-quality beef, the texture will be somewhat chewy.

Note: one concern that people have about eating rare steak is that they could get sick from bacterial contamination. Most food scientists will tell you that the bacteria would be on the surface of the meat (the thoroughly cooked part), not the internal part.

A rare steak has been cooked to the point where it starts to lose its redness and becomes a little pink. The sear is a little deeper. With a rare steak you want to a little cooking on the inside but you still want it to remain as tender as it was when raw. When you poke it with your finger, it should feel a little firmer than a blue steak but not much.

The most common level of doneness ordered in restaurants, medium-rare aims at a compromise between rare and medium. It is also easy for an inexperienced cook to overshoot or undershoot. For a medium-rare steak, you want a deep brown crust and you want the inside to be warm pink that deepens to red as you get to the center. If done properly, medium-rare steaks will still be tender.

With medium, you need a longer cooking time. The crust should be about the same brown as medium rare but it should be the same shade of pink all the way through on the inside with no red. A medium steak will be less tender — especially after it rests — and will lose a significant portion of its juices over the extended cooking period.

When a steak is done medium-well, it will have a hard and dry crust. It will also lose much of its internal moisture. The meat inside will be a pale gray with only a hint of pink. A fatty steak might still be palatable at this stage, but leaner ones will likely become leathery.

A well-done steak has lost most of its water and fat. A well done lean steak will be well on its way to becoming jerky. The internal color will be a solid gray. To achieve this without burning the exterior, you will need to lower the heat after you get the sear and cook continue to cook the steak over the low heat for a few minutes per side.

BBQ Sauce Too Sweet? Here Are Some Fixes

Dry Rub Vs. Wet Rub – How Do They Compare?