Ribeye and prime rib are among the most desirable cuts of meat. They both provide excellent flavor, while being tender enough to eat with plastic utensils if you cook them correctly. These two cuts have … 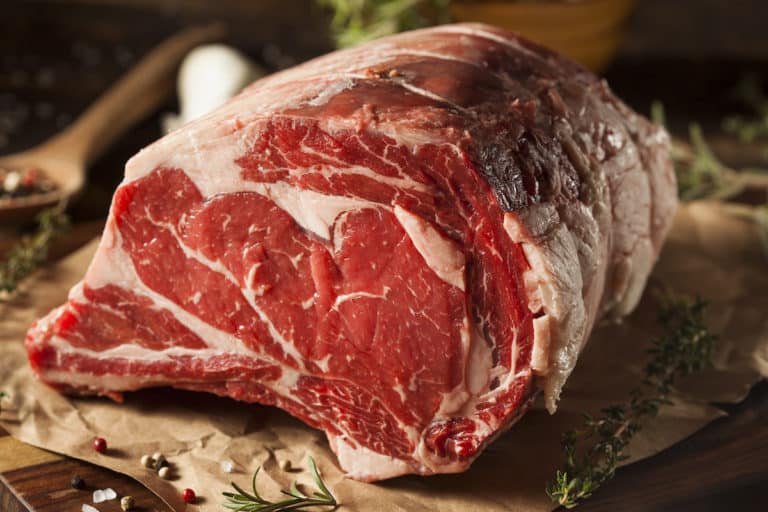 Ribeye and prime rib are among the most desirable cuts of meat. They both provide excellent flavor, while being tender enough to eat with plastic utensils if you cook them correctly. These two cuts have a lot in common, but there are also some differences. Let’s take a look at the factors that you should consider when deciding between them in our BBQ Showdown: Prime Rib vs. Ribeye.

How do ribeye and prime rib differ?

Prime rib can refer to a roast, which is a larger piece of meat; it can also refer to a slice cut from the roast. The name applies to both. A prime rib roast consists of the 6th through the 12th rib and ribeye steaks are usually taken from those ribs as well.

In other words, a ribeye steak is exactly the same piece of meat but it has been cut into smaller individual steaks. This means that the first big difference is the size. This is why you get a slice of the pre-cooked roast when you order prime rib in a restaurant, whereas a ribeye will be cooked to order.

Note that while prime rib does have the word prime in the name, it is not necessarily prime grade meat; it can be choice grade as well. The USDA grades are based on the meat’s quality rather than on the cut. In fact, prime rib has had its name for longer than the USDA’s grading system has been in place. The prime in prime rib comes from the fact that it is deemed to be the best part of the cow.

Where on the cow do ribeye and prime rib come from?

Both ribeye steaks and prime rib come from the same primal. The seven ribs that make up the prime rib cut come from the center of the rib primal. The muscles in ribeyes and in prime rib consist of the longissimus dorsi, complexus and spinalis muscles. All three are from the upper part of the rib cage, which is an area that gets very little exercise and bears no weight. The result is that the meat from that area is well-marbled and very tender.

Which of the two cuts is more expensive?

Prime rib is typically one of the most expensive cuts of meat, but it is still not quite as expensive as ribeye steaks. The front side of the rib primal, which is closer to the head of the cow is called the chuck end; the other is called the loin end. The chuck end offers more meat at a lower price per pound than the center ribs. That low price is due to the fact that it has a smaller rib eye; however, the chuck end does offer more marbling. There are also thick layers of fat between layers of lean meat. That fat will give it lots of flavor and will baste the meat internally to make it more tender.

The loin end is the part of the rib primal towards the rear of the cow and has a larger rib eye along with more lean meat. It is also usually less expensive than the center ribs.

When is one better than the other?

Because a prime rib roast will have two or more rib bones, it is typically suitable for larger groups of people. This is one of the reasons that it is often served holiday dinner parties with multiple guests. Because they are individually portioned and have a higher price, ribeyes are better suited for smaller gatherings.