Porterhouse and ribeye steaks are both considered among the best cuts for their flavor and ease of cooking. Both can be tender, juicy, and flavorful when prepared correctly but does not mean that they are … 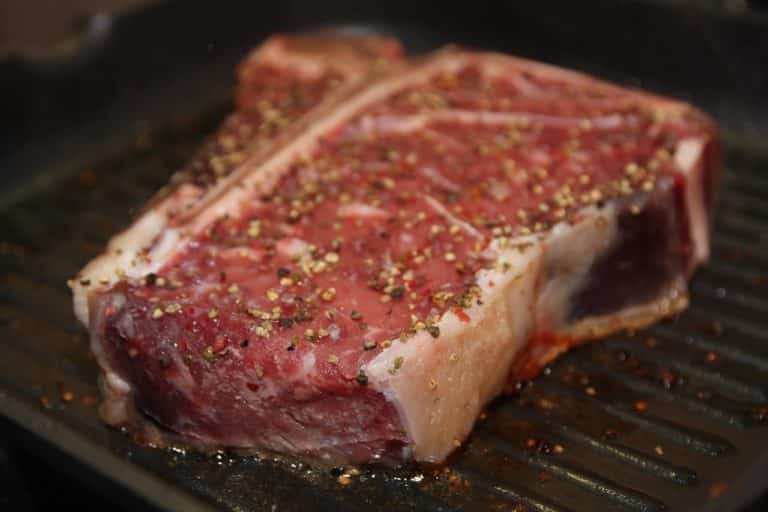 Porterhouse and ribeye steaks are both considered among the best cuts for their flavor and ease of cooking. Both can be tender, juicy, and flavorful when prepared correctly but does not mean that they are exactly the same. There are certain important qualities to take into account when choosing between these steaks. Which one is easier to cook? Is one better suited for certain cooking methods than the other? We answer these questions and more below.

What is the difference between porterhouse steak and ribeye steak?

The main difference between porterhouse steak and ribeye steak has to do with the location on the steer from which the meat is sourced. A ribeye steak is taken from the upper part of the steer’s rib cage, closer to its head. The muscles in this area do not perform a lot of work, which means that steaks cut from them are usually quite tender. The porterhouse steak is essentially a thicker T-bone (often called the “King of the T-Bones”) and comes from the loin area of the animal, which is closer to the rump. Like the ribeye steak, it consists of muscles that are unworked and which are as tender as those that make up the ribeye.

Is one of these steaks easier to cook than the other?

A porterhouse steak is consists of a number of different muscles along with a center bone. As a result, it can take longer to cook than most other steaks. The bone can also lengthen the cooking time. Porterhouse steaks are also quite inconsistent as the proportions of each muscle and the size of the bone can vary.

While ribeyes can come attached to a bone, they often do not. Ribeye steaks are much easier to cook when compared to porterhouse steaks since you have only one or two muscles to consider.

Is one better for grilling than the other?

While both steaks can be grilled, one is slightly better suited for this style of cooking than the other. Ribeye steaks tend to be fattier. The fat will melt under intense heat. Melted fat can cause flare-ups and charring. In addition, you do not want to lose all of your steak’s marbling to excessive heat. You will need to exercise a little extra caution when grilling ribeyes.

Porterhouse steaks have a center bone, which means that grilling is actually the best way to cook them. An open flame is effective since the bone may not always allow the steak to make good contact with the bottom of a pan. However, a high flame and adequate cooking time on a grill can ensure an even sear and the ideal internal temperature.

Which is more expensive, porterhouse steaks or ribeye steaks?

According to the United States Department of Agriculture’s National Retail Report for beef, the average price for these two steaks are close – with ribeye often slightly more expensive than porterhouse. Though, the prices tend to fluctuate with the average price of porterhouse steaks sometimes being higher and prices can vary from store to store depending on inventory. Overall, though, they are comparable in cost.

If marbling and its effects on texture and flavor are important to you, a ribeye steak is your best option. It is generally considered to be the juiciest and most flavorful of all steaks because of its high fat content. Ribeyes are also better if you want versatility since this cut is suitable for multiple cooking methods.

If you prefer to grill your steaks, porterhouse is the better option. It is also a significant quantity of meat, which means that it is the perfect steak for two or more people to share.

Too Much Chili Powder? Tips To Mellow The Heat