Flat iron and flank steaks are just two of the beef cuts that would have been ground or eaten by butchers in previous eras. More recently, they have become trendy and found their way to … 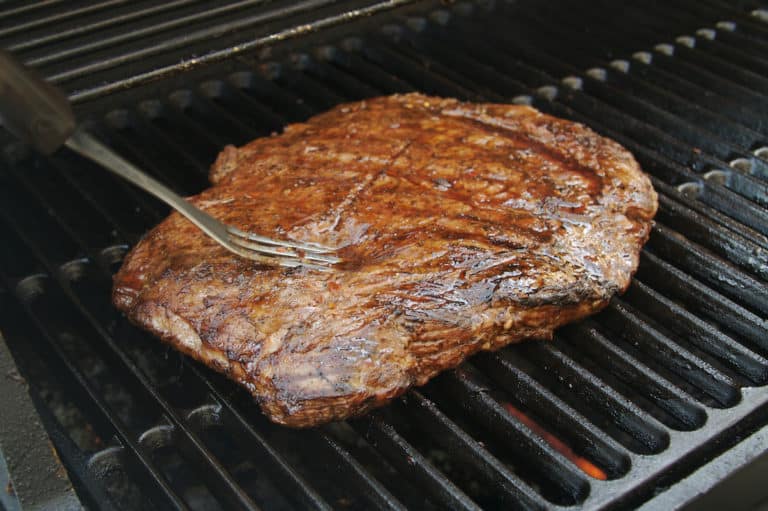 Flat iron and flank steaks are just two of the beef cuts that would have been ground or eaten by butchers in previous eras. More recently, they have become trendy and found their way to menus in high-end restaurants as chefs seek out ways to cut costs.
The flat iron name comes from the fact that this steak’s shape is reminiscent of the flat side of a clothes iron. Flat iron steaks are prized for their tenderness; in fact, they are considered the second most tender beef muscle after the tenderloin. These steaks are so tender that they do not need marination to tenderize them.

Flank steaks are also known as London broil and are tougher. They must be sliced against the grain to make it possible to chew them; however, they are more flavorful than most other steaks. It is a good idea to marinate them to make them more tender.

These two steaks are similar in some ways, but also have some important differences. Let’s take a closer look at what makes them special in another BBQ Showdown.

How do flat iron and flank steaks differ in flavor?

Flat iron steaks have good marbling along with their distinctive tenderness and have a rich flavor because of their fat content. Flank steak is known more for its strong beefy flavor than for its tenderness. It has a lot of flavor despite the fact that it is a relatively lean cut. The flavor may result from the fact that it comes from a part of the cow that gets significant blood flow.

What parts of the cow provide these two cuts?

Flat iron steak is ideal for the grill and can be grilled much like any other flat steak, including hanger and skirt steaks. The meat is dense, so you will want to adjust your heat based on the thickness of your cut. The best way to go about it is to sear on high heat and then finish on medium high heat.

You can use the same method to grill flank steaks but to maximize tenderness, you may want to sear over medium high heat and move down to medium heat.

Which is more expensive?

Flat iron steaks and flank steaks are usually around the same price. Flat iron is often a few cents less than flank steaks, but this can vary from region to region and store to store.

If you want the most tender budget steak available, opt for flat iron; however, it can be a challenge to find this cut in most grocery stores since they are usually sold off to restaurants. Flank steaks are easier to find and still fairly easy to cook. If you want an affordable steak for carne asada or if you just like richly flavored cuts, you will want to opt for flank.

How To Tenderize Skirt Steak