Cracklings Vs. Pork Rinds – How Do They Compare?

Cracklings and pork rinds most likely originated with the process of making lard. They both consist of fried pieces of pork, even though the two terms refer to different pork products. Knowing which to use … 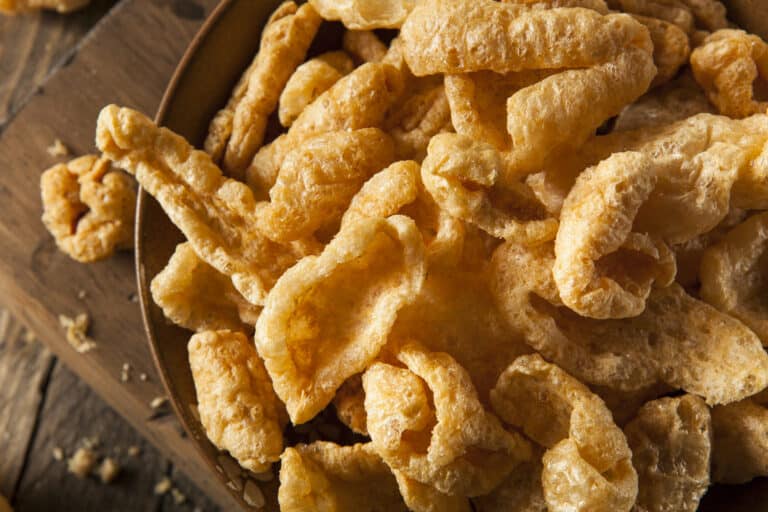 How do cracklings differ from pork rinds?

Many people seem to be confused about how to use the terms cracklings and pork rinds. You will often see one of the terms used for both. They are not the same product and the terms are not interchangeable. In the South, cracklings are residue from rendering lard. They are the random bits of pork — sometimes with the skin attached, sometimes without it — and fried fat left over after pig fat has been melted down.

Pork rinds are pieces of pig skin that have been boiled to remove as much fat as possible. They are then dried in an oven or food dehydrator before being fried. The process of removing fat and moisture is essential for giving them the right puffy texture once they are fried.

Cracklings and pork rinds are most easily distinguished from each other by their texture. Pork cracklings are harder and crunchier. They are dense because they have fat attached. They can be very hard — almost to the point of being able to break a tooth. Pork rinds without fat and moisture puff up when they are fried, giving them a fluffy texture similar to that of rice cakes.

Can you use cracklings as a substitute for pork rinds? And vice versa?

Cracklings can work as substitutes for pork rinds if what you want is a savory snack. Both are crunchy and meaty while containing no carbohydrates, which is great if you want something salty and Atkins-friendly. Pork cracklings are not as crumbly as pork rinds, which means that you won’t be able to use it in quite as many ways. For example, cracklings don’t work as well in salads or as a chip-like accompaniment for dips.

Use pork cracklings as a snack food or as a carbohydrate-free crouton alternative in salads. They also make a great additive to cornbread, where they enhance both the flavor and the texture.

Use pork rinds as an alternative to tortilla chips. Serve them with salsa, guacamole, and other dips. Alternatively, you can grind pork rinds and use them to top baked mac and cheese or add them to the breading for fried chicken. Use them to lettuce and tomato in a sandwich for a quick and easy version of a BLT.

Cooking Low And Slow: The What And Why