Technically, Chateaubriand is a dish and not a cut of meat; however, sometimes cuts from beef tenderloin are sold as Chateaubriand steaks. These cuts and filet mignon are two very similar pieces of steak. They … 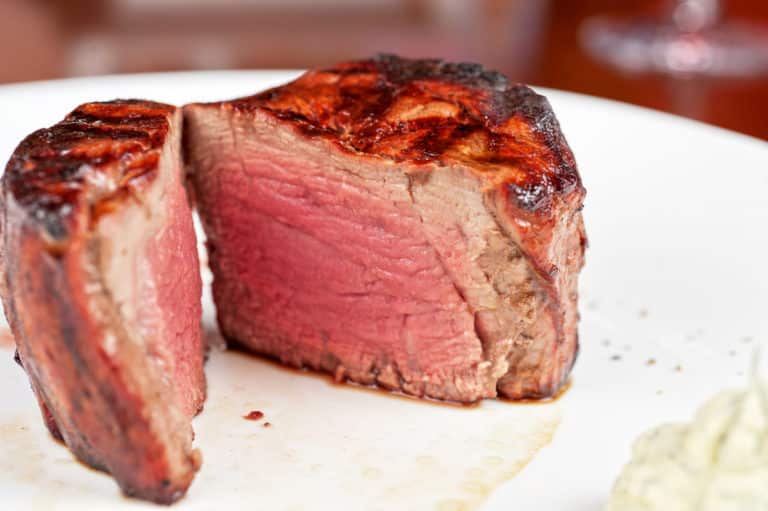 Technically, Chateaubriand is a dish and not a cut of meat; however, sometimes cuts from beef tenderloin are sold as Chateaubriand steaks. These cuts and filet mignon are two very similar pieces of steak. They both originate from the same place on the cow and are very tender when cooked with the correct methods. If you are trying to decide between the two, consider the following questions in our BBQ Showdown: Chateaubriand Vs. Filet Mignon.

How do Chateaubriand and filet mignon differ?

The two main differences between Chateaubriand and filet mignon have to do with the size difference between the two cuts and the methods used to cook them.

Chateaubriand is a larger cut that is meant to serve two or more people, while filet mignon is individually portioned.

The traditional method for cooking Chateaubriand is to roast it in an oven while regularly basting it with butter. The roasted meat is then sliced, covered with béarnaise sauce and served. Chateaubriand can be grilled, but it is less common to see it prepared this way.

Filet mignon is a more versatile cut that can be cooked in a variety of ways including on a grill.

Where on the cow do you find Chateaubriand and filet mignon?

Both cuts are sourced from the tenderloin, which accounts for their buttery texture. The tenderloin is the cylindrical strip of meat that runs parallel to the spine and that is harvested and often sold whole or cut into sections. It has a wide end and a narrow end.

The Chateaubriand cut is from the center section of the tenderloin, though some people claim that it should come from the widest end.

While it is possible to grill both, one is definitely easier to cook over an open flame than the other.

Chateaubriand is a thick cut that can weigh as much as 2 pounds and will be at least 1 ¼ inches thick. This means that it requires a lot of care to ensure that it is fully cooked. It is easy to wind up with meat that is too rare or too dry. If you decide to do it, ensure that you have one side of your grill hotter than the other. Dividing your grilling surface into zones gives you a place to put the meat if it is in danger of charring. You will also need something with which to baste your Chateaubriand.

While the cost of the cut can make grilling it a stressful endeavor for inexperienced cooks, filet mignon is unquestionably the easier of the two to cook on a grill. Its manageable size makes it easy to gauge the level of doneness.

Filet mignon is usually more expensive when compared to the rest of the tenderloin, which is the source of Chateaubriand. It is estimated that a single cow only has about 12 pounds of filet mignon, which is what accounts for the higher price.

Chateaubriand will take time and care to cook, so may not be ideal if you are cooking for more than two to three people.

Filet mignon is easier to cook and therefore can be prepared with relatively little effort, even for a larger number of people.

How To Dry Age Steak At Home