A cow’s carcass is divided into major cuts called primal cuts, which are subdivided into subprimal cuts. Here is a look at beef primal cuts and what each has to offer. Tongue The tongue cut … 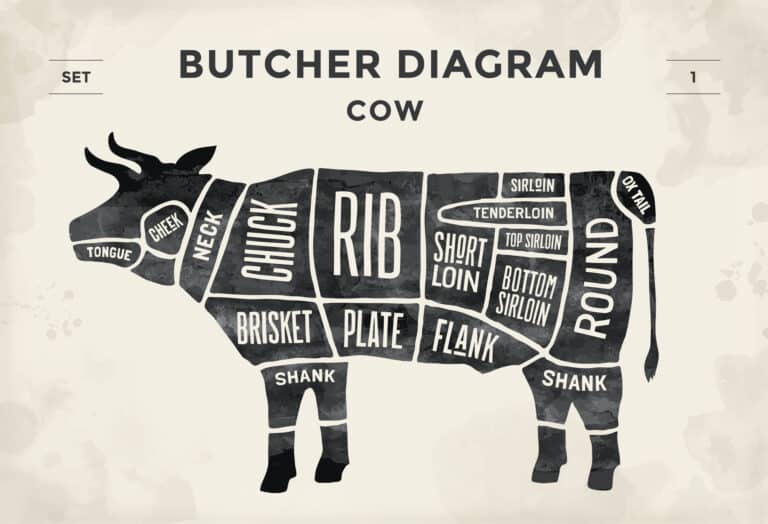 The tongue cut is from the head part of the cow as you might expect. It has a high fat content and a fine grain with a tender texture. The fat content gives it an intense beefy flavor. It is cooked in various ways all over the world but is most often simmered.

Beef cheeks are another cut from the head of the animal. They are the facial muscles on either side of the head and are heavily used to chew cud, making them tough. When properly cooked the cheeks will have a stringy but tender texture and will soak up braising liquids well.

The neck cut is — you guessed it — right below the head. Beef neck has similar qualities to another part of the cow’s spinal column: the tail. It has the tenderness and rich flavor of oxtail without the fat and lends itself to the same simmered dishes.

Located at the front of the cow’s chest, the chuck primal cut offers a good balance between meat and fat. Subprimal cuts from the chuck include various roasts like the blade chuck roast and blade steak. Most chuck cuts are flavorful but tough and will need long braising; however, there are a few tender ones.

The brisket comes from the cow’s lower chest and consists of two muscles, one lean and the other fatty. The brisket is considered extremely tough and moderately flavorful. Experts recommend an hour per pound at a maximum temperature of 250 degrees Fahrenheit.

The shank is the animal’s thigh, which means that it has heavily worked muscles and connective tissue. As such, it is lean and very tough. It must be cooked extensively for long periods. Experts recommend tenderizing with a mallet before cooking to break down the meat.

The rib primal cut contains some of the best beef cuts including ribeye steaks. Located in the center of the cow’s back, the rib primal cut offers tender meat that is marbled and richly flavored. No long cooking times are necessary since these cuts are already soft.

Also known as the short plate, the plate is located at the center of the cow’s belly. In some countries, it is considered a part of the brisket. Like the brisket, it is very tough but it is particularly flavorful. Hanger and skirt steaks come from the plate.

The short loin is the rear middle section of the cow and contains another group of prized cuts. These include tender and marbled cuts like the T-bone, porterhouse and strip steaks.

Located on the rear underside of the cow, the flank is flat and lean. It is also fibrous and should be cooked quickly and then cut against the grain to ensure that it is tender enough to eat. It is tough but with a strong beefy taste.

The sirloin is mostly lean but tender and with a moderate flavor. Keep it whole to make roast beef or cut it into inexpensive steaks. The full sirloin includes the top and bottom sirloin cuts. Because it is close to the heavily exercised rear legs, the sirloin is tougher than the cuts closer to the animal’s middle.

The tenderloin is a part of the loin and is the most tender cut of beef, though it is not the most flavorful. It stretches from the short loin to the sirloin.

The round is the cow’s back leg and is extremely tough but can be flavorful when cooked properly. It can be left whole as a steamship or broken down to roasts and stew meat.

Because it is full of collagen, the oxtail has a rich flavor and silky texture.

What Steak Should You Use For Fajitas?

Turkey Bacon Vs. Pork Bacon – How Do They Compare?